Bob Williams, '79, will be presented with the Distinguished Alumnus Award at the 139th Commencement celebration, Saturday, May 14, in the Sports Arena.

Williams, noted for his skill as a communicator and strategist, was promoted in 2010 to vice president of communications at the National Collegiate Athletic Association (NCAA). He had served as managing director of public and media relations—and primary spokesman for the association—at the NCAA national office in Indianapolis, Indiana, since 2005. 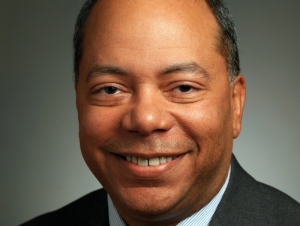 In his new role as the chief communications officer, Williams directly supports NCAA president Mark Emmert and leads overall communications with an emphasis on communications strategy. He works closely with NCAA members, external constituents, and the media to accurately tell the story of student-athletes who compete in the classroom and on the field. The NCAA represents more than 1,200 member institutions, conferences, and organizations.

At the NCAA, Williams has engineered the creation of a new communications group consisting of three units: public and media relations, digital communications, and image management and strategy. He has also provided communication leadership as the association addresses critical issues such as academic reform and financial reform initiatives.

Williams joined the NCAA following a 25-year career in the United States Air Force, where he managed public affairs in a variety of capacities and retired as a colonel. As director of public affairs for Air Combat Command at Langley Air Force Base in Virginia from 2002 to 2005, he led a team of 54 communication professionals in developing global communications strategies. As chief of the Air Force’s public communication division at the Pentagon from 1998 to 2002, he led branding efforts, including the development of an Air Force corporate logo and advertising campaign. Williams earned numerous awards from the Air Force for his work in public affairs.

A native of Rome, New York, Williams received his bachelor’s degree in broadcasting from Buffalo State and his master’s degree in mass communication and public relations from Boston University. Active in the community, he serves on the board of directors of the Fathers and Families Center in Indianapolis, a nonprofit agency that assists young fathers in becoming responsible and involved parents. He also serves on the advisory board at Indiana University’s National Sports Journalism Center.